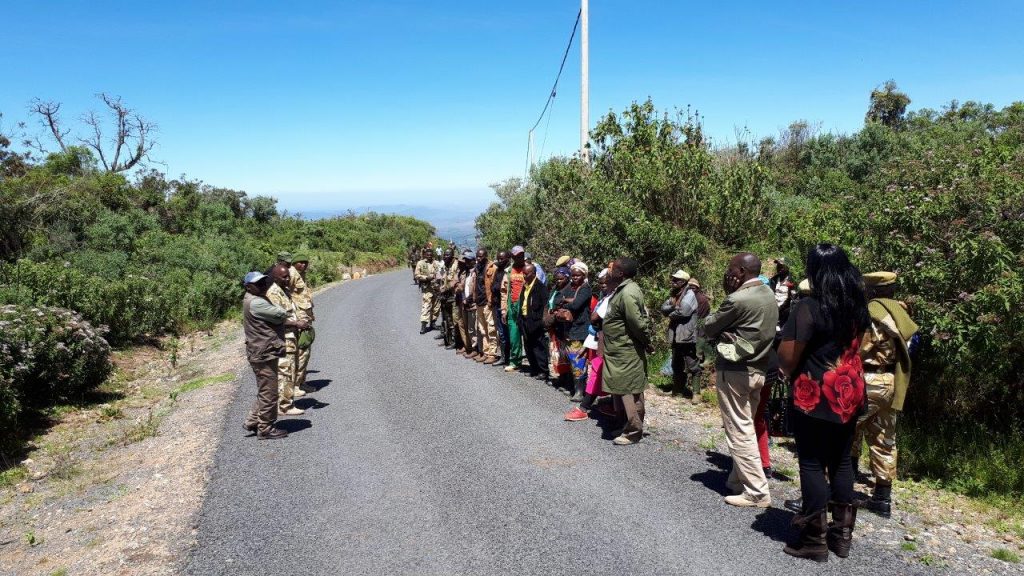 1500 hagenia abyssinica seedlings planted. The balance of 500 seedlings will be planted the weekend of 9th December. 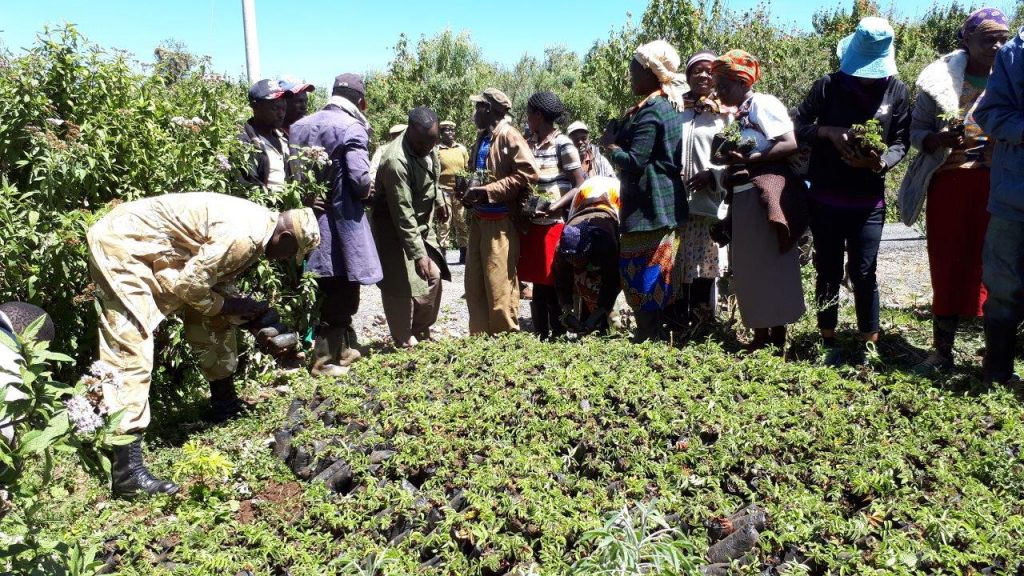 There were 23 members from the Sirimon community, Kenya Forest Service Staff and 10 Kenya Wildlife Service Rangers 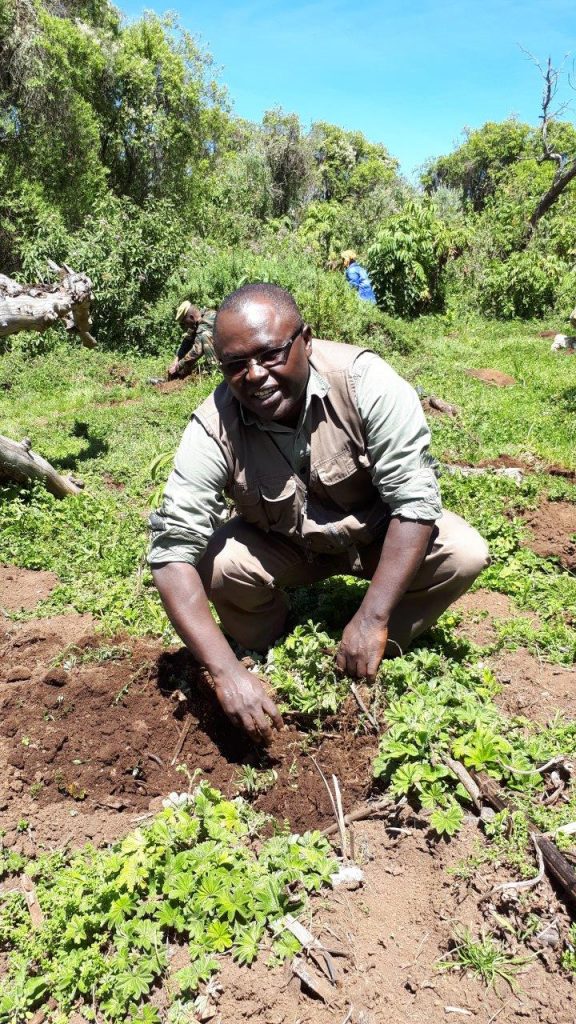 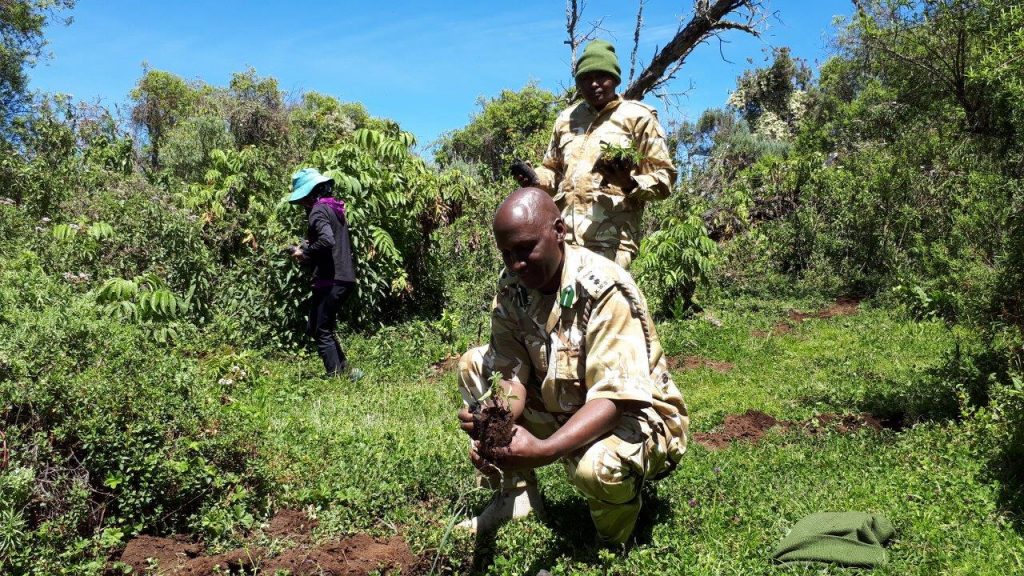 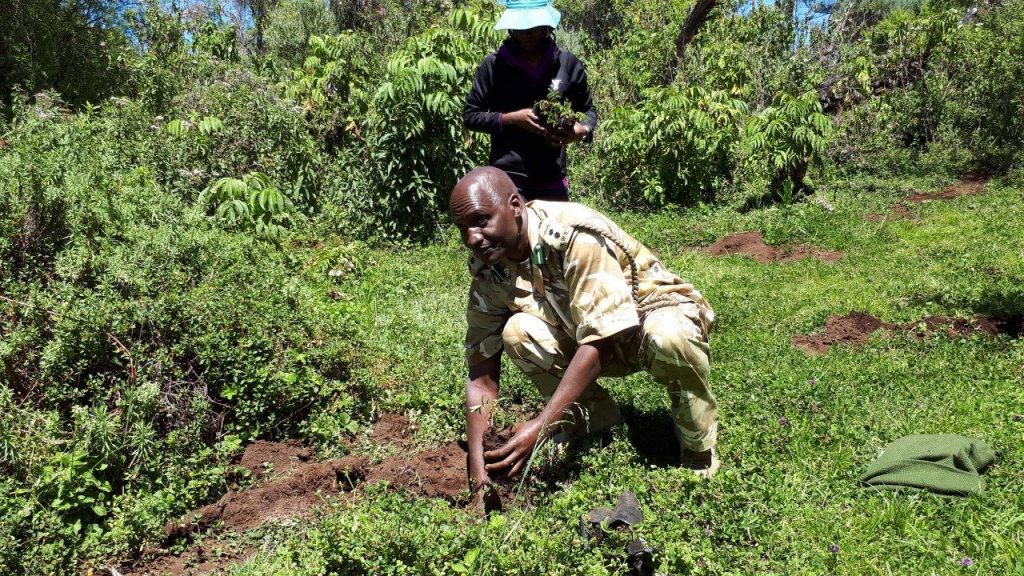 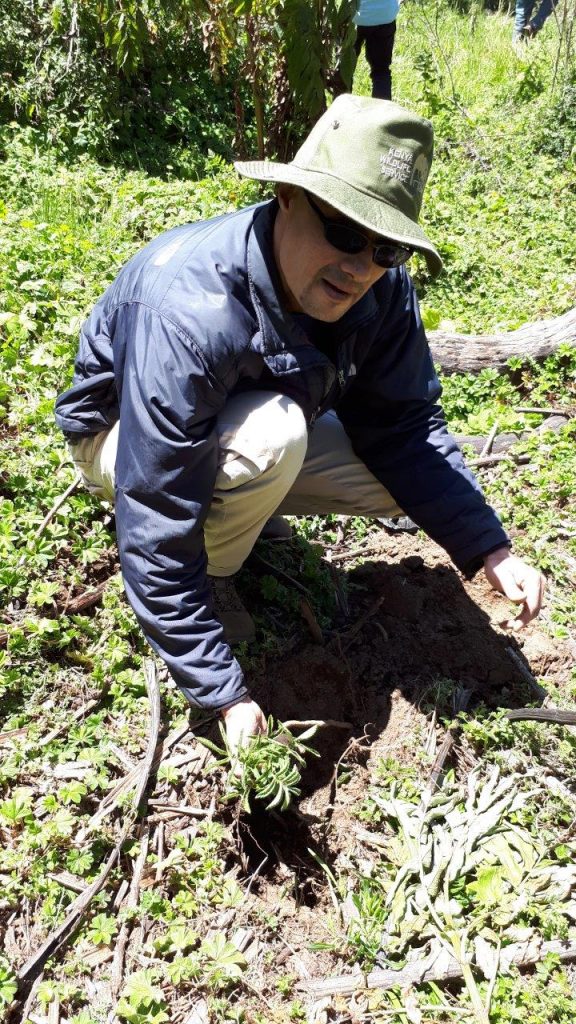 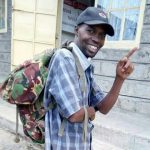 Simon was synonymous with Fischers Tower in Hells Gate. From as far as i can remember he has been setting up his ropes and getting people to climb there and at the Fischers Cliffs. Numerous times he has retrieved gear that was stuck or left by us as a favour.

Occasionally he used to take people up onto Main Wall on selected climbs. His voice could be heard booming around the Tower encouraging mainly first timers up the rock.

Last year August I was climbing on the main wall and a friend fell and hurt his back. Simon and Maina heard his screams and were at the base of our climb to help. As I started lowering my friend 50m down to the base, Simon was there both guiding me and giving out instructions to the injured climber. They made a stretcher and carried him down till the car.

Again last month I was climbing on Main Wall on Gold Rush buttress. We abseiled from the top of this buttress (which is less than half way to the top of the Main Wall) and as I was nearing the end of the rope, the ground was still much further below me. Again, ever watchful Simon was there, asking if everything was all right.

He was the guardian over the park. RIP.

Below are some reflections from his friends –

My name is Njenga Mungai, I knew Simon very well. I knew Simon very early in his life, when I consider Simon’s life I attribute a lot of his successes and failures in his life to myself…I remember long ago going to climb at Hells Gate; Simon was a small boy, he was extremely fascinated when he saw me climb the steep tower… he was awe struck! I am a teacher and naturally if you are a teacher you teach whoever is willing to learn.. you make the impossible possible, you unravel magic…you empower the powerless! You teach others to be better than yourself! Simon was a willing and quick learner. Initially, we had a mutual relationship; he was my free handy man, taught him   how to coil my ropes, to place my anchors, to place my protection… to tie my webbing harness (commercial harnesses were rare then so we used tubular webbing)…Simon learned fast and in a short while he made my work easier and became my de-facto assistant. He was always a cheeky boy and always loved the sandwiches I always brought for lunch!…I remember once when I made him a peanut sandwich and he made a comment we always many years after laughed about…”I don’t eat shit he said…” and surely doesn’t peanut butter look like shit?…Simon was frank and expressed himself with the most endearing and broadest smile and laughter…the biggest heart that will ever scale up Fischer’s Tower…you wonder what weight of heart those fantastic ropes can carry!…Simon never denied a willing climber a chance to discover their talent and how far they could push themselves…he never worked for profit! He loved climbing! He loved seeing others achieve! Who didn’t know Fischer’s Tower was Simon’s elder brother? Who doubts Fischer’s Tower himself mourns his younger brother?…Simon was a legend within a short time; you saw him dressed up with his gear belt of friends, Camelots, nut, Prussics and other assorted gear…his dear helmet and you knew you were in safe hands!…I remember us once rescuing a fallen climber from one of the ledges of the tower; he survived and Simon was the unsung hero in that rescue…Simon was a hand and a heart you count on; he trained even the most mighty; diplomats, soldiers (The British Army loved and used his skills), doctors, school children…he changed people’s mindsets, he touched many!…this is a hero we know is as good as they come!…Simon loved fan; unknown to many; if you are a safe and serious climber, it can be very stressful as you watch to make sure “no accidents happen!”…and as is the case; Simon who has probably clocked the most hours of climbing in Kenya for the sheer fact he was always based at the iconic tower never caused a single accident…if you have been a climbing guide on the tower; the serious attention to safety can deny you the  chance to eat… who eats and belays at the same time? Simon didn’t eat lest his safety guard goes down…you can imagine after a very stressful day, at day’s end; a little alcohol to calm the nerves would always be welcome; maybe I would imagine our hero was so tired he would fall asleep; maybe wake up the next morning and rush to do what he loved best!…you can imagine what years of such routine would do…in his last years if you knew Simon well, you knew something was going to give in. Many feared he would let go of his belay hand…No, it was not going to be the case! Simon’s honest and sure contractual belay hand never let go! It’s his faithfulness and safety obsession that would eventually eat him slowly…I don’t know the exact circumstances; but am told as usual Simon came from a day of climbing…to calm his tested nerves took a deserved rest and as usual took some alcohol to calm his nerves as usual…unfortunately, he lost count and  couldn’t hear the decibel of safety with the alcohol…I can imagine his already weakened liver couldn’t handle the toxins without food to help process…People who are good; very good at what they do; have a weakness they run to after performing the best note that makes the world declare them heroes! Beethoven, Mozart, Napoleon, Simon and the list is endless…Simon is a hero; and just like Beethoven’s ninth symphony or Fur Elise have made the iconic hero’s music reverberate in our hearts for ages, good Simon’s influence and heroic touch will echo through the ages of the hearts he touches…and as the wind blows through Fischer’s Tower who won’t miss Simon’s iconic and gentle instructions of how to go higher and touch higher ambitions! Simon, yes you had a weakness; just like you had great strengths…for us who you left,let’s not talk in hushed tones of what took you away…who amongst us doesn’t have an addiction and is strong?..only the weak! Simon am so glad it was alcohol and your belay hand as we said from the start… never let go! Thank you Simon; you never let go! I will always miss you…I will always love you! Go ahead, go on in peace…belay me safely into the heaven’s gate…just like you led me many times to the iconic tower! RIP Simon

Sultan 048 – This is soo touching. My first climb was made possible by Simon. This was back in college when I we went for a bushcraft and survival skills course at Hell’s Gate. I later come back here as a guide. Simon is immortalized at the tower. We will always see you there enroute to the gorge and recall how we used to call you ‘Mbíya’ which is rat in reference to the hyraxes at the tower. Fare Thee Well Simon.