On 27 January a group of us set out to Mt Suswa, a unique double-crater volcano in the Rift Valley, for a short weekend trip to explore the area and hopefully run the trail around the entire rim of the inner crater, starting and returning to the main campsite. 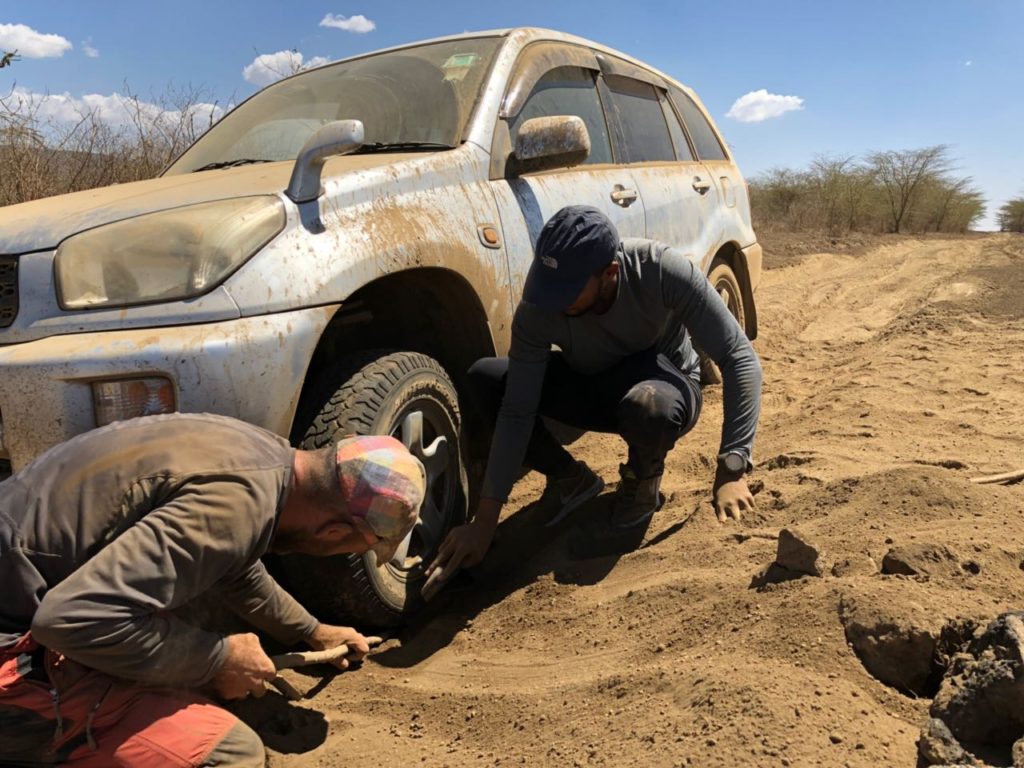 sand traps on the road to Suswa

The drive from Nairobi takes around 3 hours all told, given the poor state of the track after turning left off the tarmacked Narok road, just past the satellite station (look for the Conservancy signs on your left). The ownership of some of the land driven through to access Mt Suswa Conservancy proper seems to be contentious and shifting at times, and at one point we had to drive back 100 m to take a parallel path as the way we were taking had been blocked by a disgruntled Maasai. A 4×4 is needed to access Suswa, as the trail goes from occasionally muddy and sandy (two cars got stuck for varying amounts of time near the road), to steep and rocky before emerging into the rolling fields of the inner rim, punctuated by steam vents bursting through the volcanic soil and ingeniously harvested for water by locals. 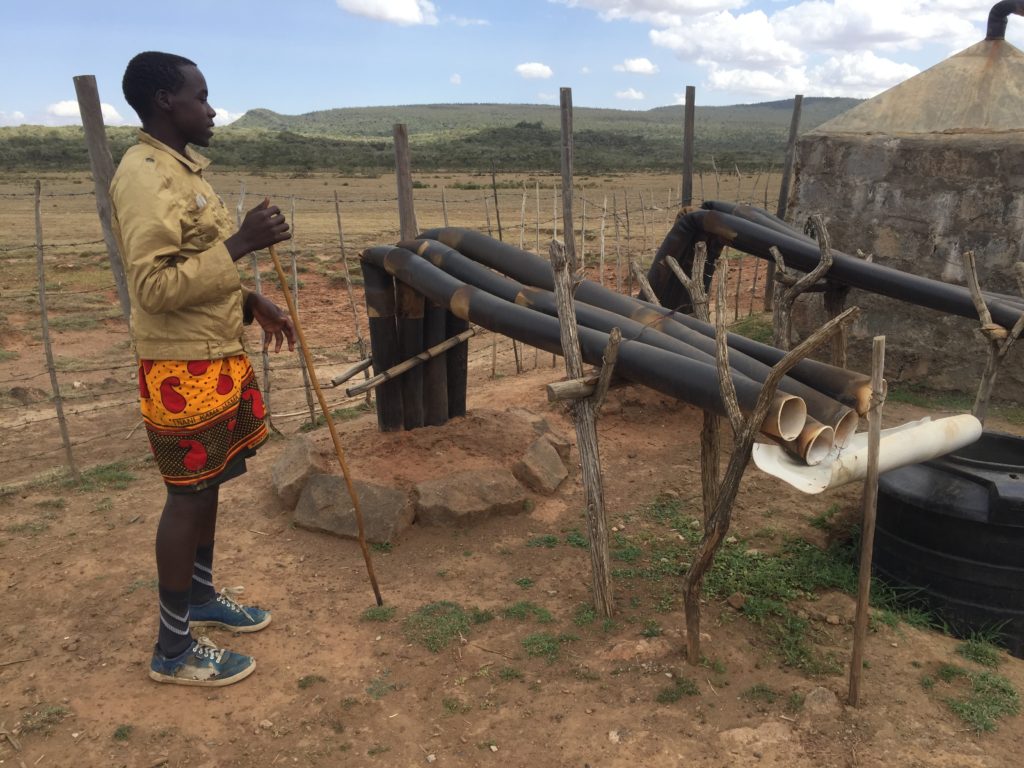 But the views at the top are worth it, with tents set up on the inner rim overlooking a vast crater punctuated by a volcanic plug in its centre, the outer rim providing a wide ring behind. 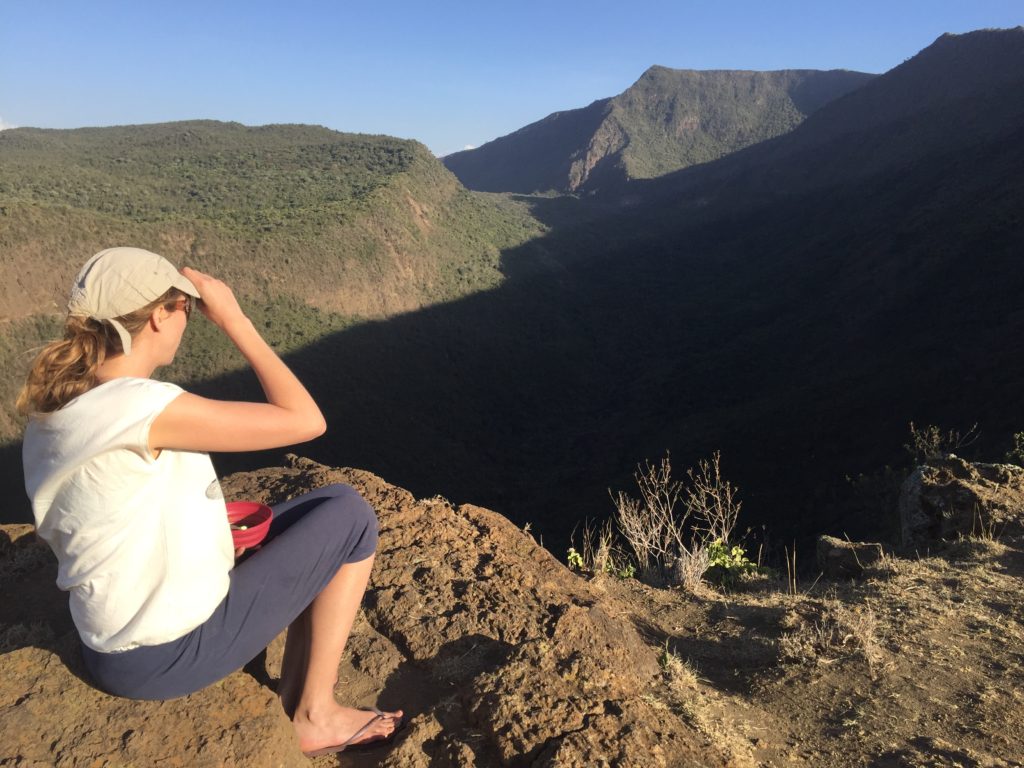 a campsite with a view!

The first day we set up camp before heading down to some nearby lava caves, an impressive formation of interlinked caverns, the walls sometimes twisted into fantastical shapes as the lava cooled and solidified. At one point, they open up into a grand amphitheatre dubbed the Baboon Parliament, as when returning at sunset the dominant male supposedly sits atop a rocky mound to hold court with the dozens of his cohorts gathered around. As they enter the caves at dusk, thousands upon thousands of resident bats take flight into the penumbra. During the day they can be seen hanging in dark huddled masses on the ceiling, and the stench from their piled dried guano on the ground can be overpowering – a buff to cover the nose is highly recommended! 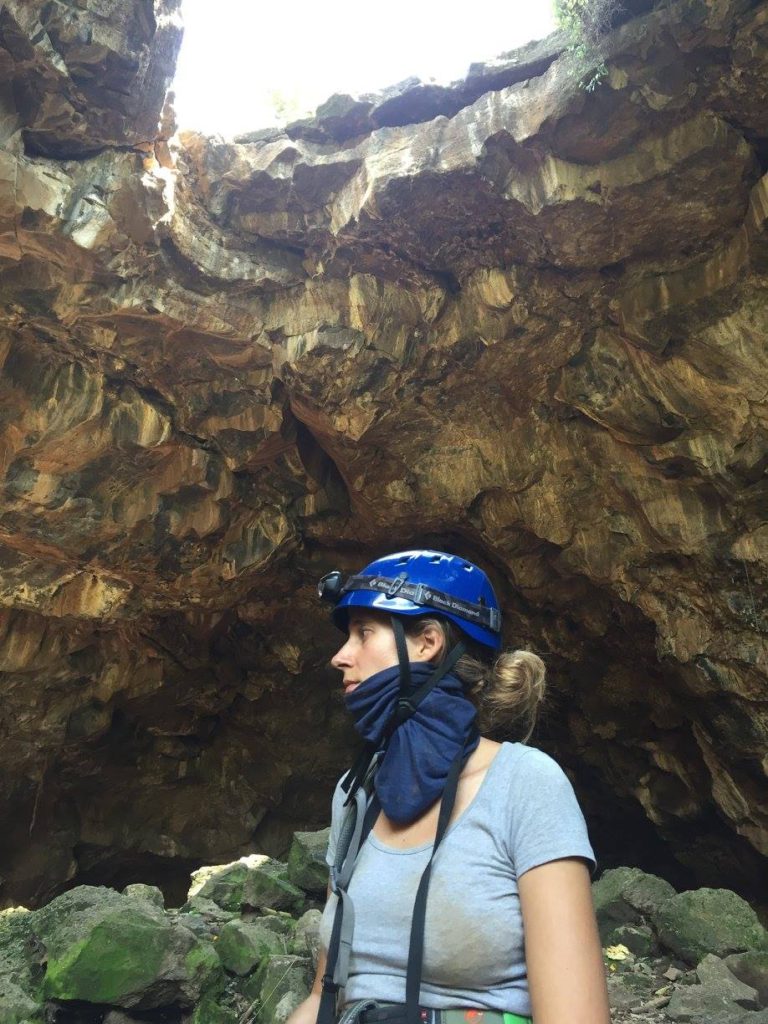 The caves are easy to find, but a guide is probably recommended to find your way through, especially as it’s the usual practice within the conservancy. Two of us mountain biked down behind the cars to the cave system from camp – besides a few acacia thorns the tracks were pretty ideal, rock-free and undulating. On the way up Daniel, our guide, took my bike and cycled back up in full shuka, Maasai sword rattling at his side. 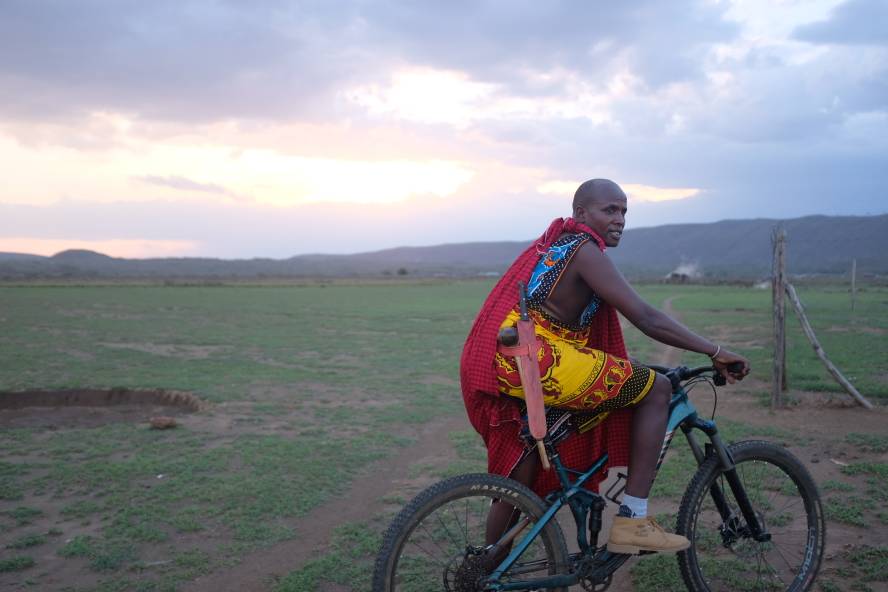 Daniel cycling back up to camp

On Sunday the group split into several factions, some to hike around the entire rim, some to hike up to the highest point of Suswa and back to camp. Three of us along with Daniel set out at daybreak to try and run the entire trail. The going was tough at first, climbing for the first hour to the highest peak, standing at 2355 m according to my phone. Within ten minutes we’d lost Daniel, again running with sword and shuka, as well as heavy-looking boots, and had prepared ourselves to trail-finding alone for the rest of the way. To our surprise, just before the peak he came bounding past, complaining that the cycle the day before had left his bum sore! 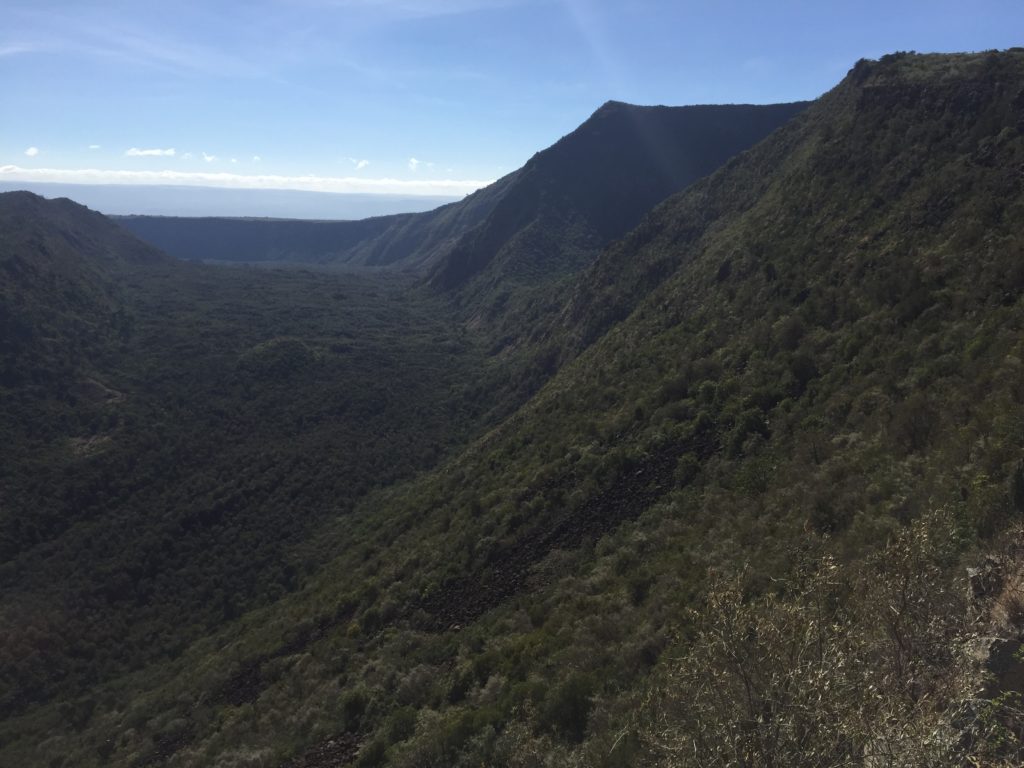 View of the inner crater, fumeroles, and summit of Mt.Suswa 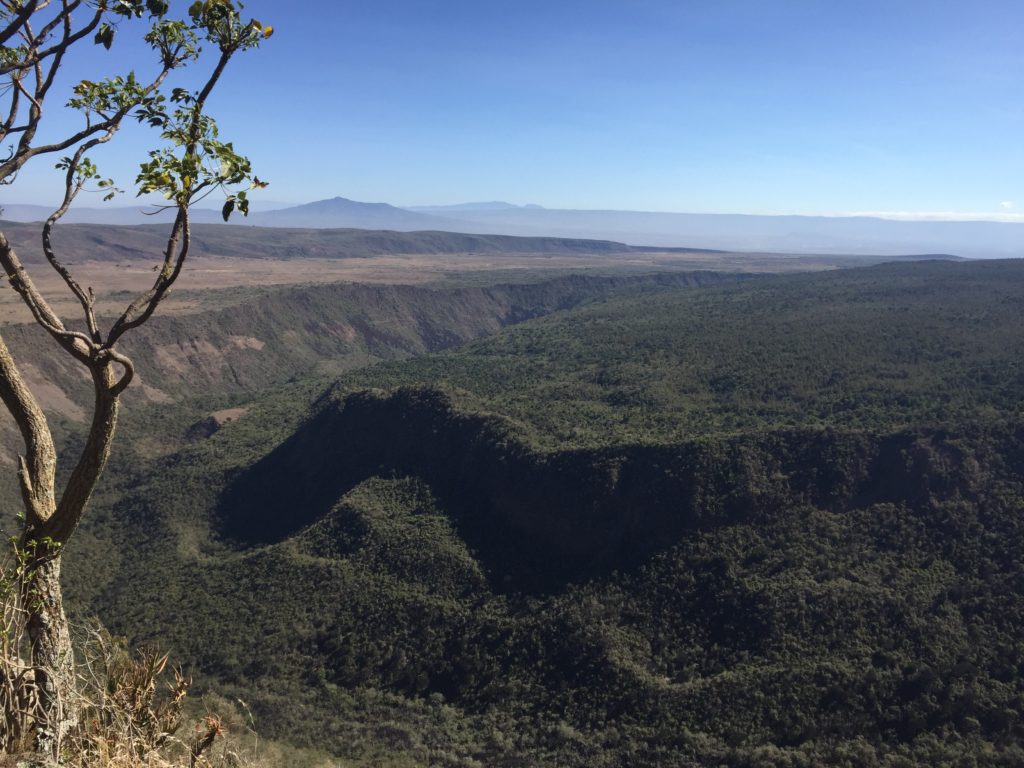 View of the plug, inner crater and out crater walls from near the summit. Plus Mt. Longonot and the Aberdares in distance

The trail to this point was pretty well-marked, then descended on rocky slopes slightly away from the rim, to avoid more difficult terrain. After hearing some horror stories about the trail, once past a few hundred metres of tricky descent it flattened out again into nice cattle trails pretty much the whole way back to camp, cutting left and through tranquil homesteads dotted on the green plains. With a couple of stops to drink and eat, it took 3h30 to run the whole way, for a total of 20.74 km according to my tracker, with 679 m of elevation gain (and loss, given the trail went in a loop). Daniel impressively kept up pretty much the entire way, and we arrived back to camp for a well-deserved nap in the shade before the hikers began trickling back from their various adventures, including one unfortunate hiker who was chased off-piste by a swarm of bees… 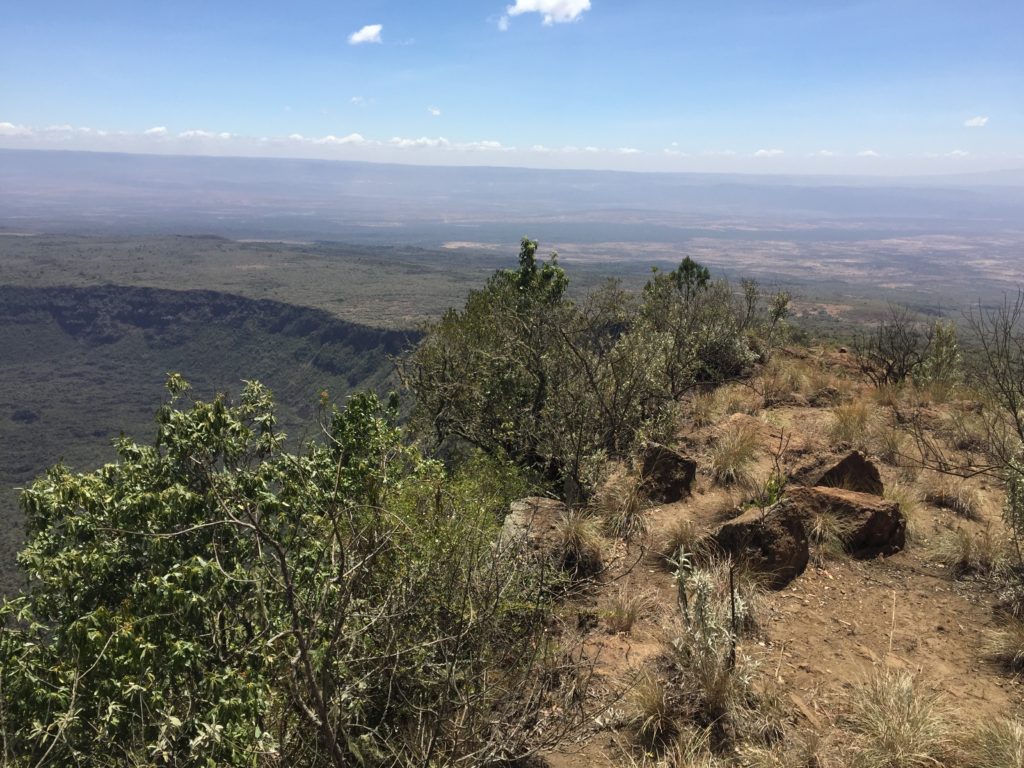 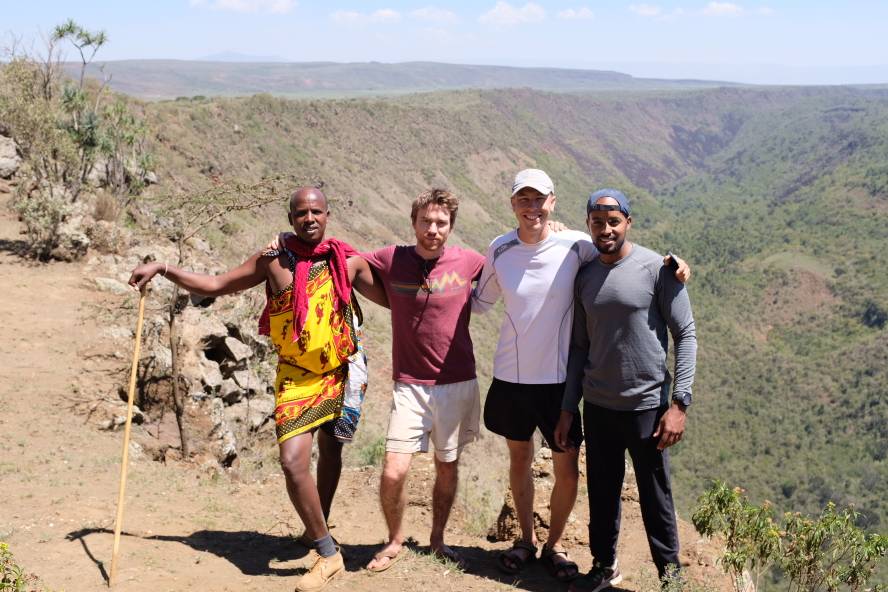 So get out and enjoy this wonderful community-managed conservancy!

by: Ian and Christine

Costs: 500 per day conservancy fee; 500 per night camping fee; 10,000 total for a guide for 2 days, for a group of 15 people (the usual fee asked for is 2,000 per person for a guide per day), though this needs to be negotiated on an ad-hoc basis – mentioning MCK will probably lead to a discount.