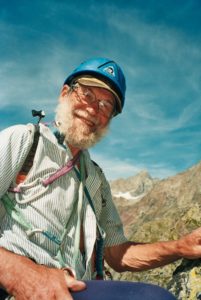 8 entries.
Rob Wilson from Winchester, UK wrote on May 11, 2021
I first met John in Kenya in the early 90s during a climb on Mt Kenya. He adopted our group including Shon and helped us explore the area. On returning to the UK he kept in touch and mentored our group into the Alpine Club and into new adventures. A great character and mentor.
Shôn Roberts from Holyhead wrote on May 8, 2021
I met John on Mt Kenya in the early 90s and climbed with him several times in the UK.
Had not seen him for 25+ years and came across this article by chance.
John had a great presence and his enthusiasm for climbing was infectious. Sorry to hear that he has passed away.
Evans Wagura from Nairobi wrote on November 19, 2020
Thanks, John. People like you are what the world needs more so Kenya despite many not having a chance to explore it. I like and love the idea of Hiking in case there is a club I would like to join thanks
Justus Arani from Kitale Kenya wrote on September 8, 2020
I may have not known hi m personally but a lover of hiking and climbing and am sure he did marvelous job we celebrate his contributions to this field
Hugh Alexander from Kirkmichael, scotland wrote on March 14, 2019
John leaves a large gap. A great man and a great friend. Obituary here: http://www.uncommonsolutions.org/DJTmemoriam.htm
Chris Watts from Norwich wrote on March 8, 2019
So sorry to hear of John's passing and condolences to family and those, like me, who knew and were inspired by his sense of fun and adventure.

I climbed and explored with John in Kenya back in the mid 1970's including a walk along the Aberdares and underground on Suswa.

Fondly remembered. CW.
Arshad Khan from Nairobi wrote on January 26, 2019
Although I knew John from way back it wasn't until 2009 that I really climbed with him and noticed how fit and competent he was on the rock despite being 75 years old! We climbed that summer in North Wales, with Andrew Wielochowski and my son Sahir, and later in September in the Gran Paradiso, Italy, whilst celebrating his birthday at the Rifugio Pontese.

I remember us two putting up a new route, which he recorded in the hut journal and afterwards sitting out side the hut he would exclaim..."Isn't life wonderful!!"

(p.s. the profile picture was taken in Sept 2009 during the new climb, not May 2015).
Derek Buckle from Redhill, UK wrote on January 25, 2019
I have known and climbed with John for well over 25 years since his return to the UK from Africa and he was a constant source of inspiration to me and many others. Being 10 years older, he was my role model during all of this time. John was an adventurous individual, always seeking out new routes, new climbing opportunities and new places to visit. When I retired some 22 years ago John whisked me off to climb on Mount Kenya within one month of my leaving work. We never really looked back and it was a wonderful opportunity. Subsequently we went to the European Alps, to Nepal and then to the Georgian Caucasus, where John eventually realised that his days of high altitude mountaineering were nearing an end. It did not stop him climbing, however, or of going to the lower mountains of the Alps and Kazakhstan. Fortunately I managed to visit John in hospital two weeks prior to his death. He was in remarkably good spirits, despite clearly being ill. He knew that he would not be returning home, but I like to think that our reminiscences helped to sustain him during his final days. He will be sadly missed by me and many others. Derek Buckle